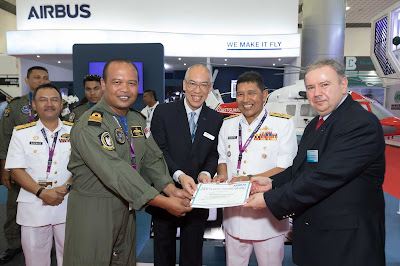 
at the Langkawi International Maritime and Aerospace Exhibition (LIMA) to celebrate the Navy’s
excellent flight operations record, as well as its achievement of 19,000 flight hours with the AS555
SN Fennec fleet.

At the same time, Lieutenant Commander Muliadi Mohammad Nor received the certificates of
achievement for 1,000 and 500 flight hours respectively on the AS555 SN on behalf of the pilots.
The Royal Malaysian Navy’s fleet of six AS555 SN Fennec helicopters have been in service since
2004. The light twin, multi-role AS555 SN fleet is used for training missions, and for the detection
and over-the-horizon targeting. Together, they have achieved over 19,000 flight hours.


***
About Airbus
Airbus is a global leader in aeronautics, space and related services. In 2018, it generated revenues of €64 billion and employed a workforce of around 134,000. Airbus offers the most comprehensive range of passenger airliners. Airbus is also a European leader providing tanker, combat, transport and mission aircraft, as well as one of the world’s leading space companies. In helicopters, Airbus provides the most efficient civil and military rotorcraft solutions worldwide.