Complexes equipped with drone carriers for guided munitions are currently one of the most promising areas in the unmanned airborne system development. KUB-BLA is designed for defeating remote ground targets. The unmanned aerial vehicle delivers special load to the manually set target coordinates or to the image from the guidance target load.


"This complex represents a step to completely new conduct of operations. We hold strong position in the forefront of countries manufacturing such weapons," said Rostec's CEO Sergey Chemezov. "The high-precision drone comes within 30 minutes at a speed of 130 km/h. The shell is delivered to the target by the complex regardless of terrain or whether the target is concealed or not, both at low and high attitudes It is extremely accurate and efficient weapon being very hard to combat by traditional air defence systems."
The complex advantages include covert launch, high accuracy, noiselessness and ease of use. Its speed range is between 80 and 130 km/h, time in flight is 30 minutes, payload is 3 kg, and dimensions are 1210*950*165 mm. The unmanned attack complex has been successfully tested and is ready to application.


ZALA AERO is a leading Russian developer and manufacturer of unmanned airborne systems, unique target loads and other technical means to secure their application. Since January 2015, ZALA AERO is part of JSC Kalashnikov Concern.
Posted by Minda Pertahanan at Monday, February 18, 2019 No comments: 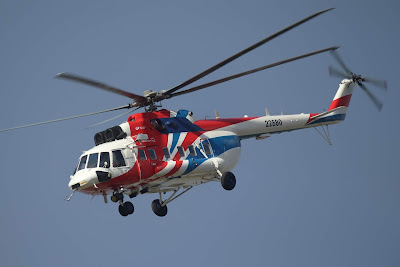 The Russian Helicopters holding company, part of State Corporation Rostec, and the
Federal Air Transport Agency (Rosaviatsia) have delivered technical and operational
documentation for the Mi-171A2 helicopter to the Brazilian National Civil Aviation Agency.
Brazilian aviation authorities will decide on the certification of the helicopter for the local market
based on its application.
“Brazil is our long-time partner and one of the key countries in South America for the promotion of
Russian helicopter products. Mi-171A1 helicopters have been successfully operating in the
country for more than 10 years, and I am sure that the new helicopter will soon also have the
opportunity to earn a positive reputation. Brazil’s certification authority is processing the
documentation received on the Mi-171A2. Considering experience certifying the Mi-171A1
helicopter, I think that this issue will be resolved in a short time,” said general director of Russia
Helicopters Andrey Boginsky.
“In light of Brazil’s high demand for mid-class multipurpose helicopters, we are bringing to the
local market a new machine — modern, roomy and reliable. The Mi-171A2 helicopter provides
long range, which is important for a country where the machines are operated in hard-to-reach
areas. We intend to develop after-sales service as part of an international partnership to
guarantee maximum operational life and as a prerequisite for flight safety,” added director of the
Rostec aviation cluster Anatoly Serdyukov.
In 2005, the Mi-171A1 helicopter optimized for the requirements of European commercial
operators and the FAR-29 aviation regulations received approval for the Type Certificate in the
Brazilian Aviation Register. During its development, special attention was paid to safety issues. In
the same year, the first Mi-171A1 helicopter was delivered to Brazil.
In 2010, the Mi-171A1 helicopter, presented by the operating company Atlas Taxi Aereo, won a
Brazilian state oil and gas company Petrobras tender to carry out aerial work in the Amazon due
to its positive characteristics and price/quality ratio.
The T-HUMS system (onboard monitoring and diagnostics system) was installed in the new Mi-
171A1 helicopter for the first time on an order by the Brazilian company. It provides automatic
monitoring of a large range of nodes in real time, significantly increasing flight safety. The use of
the T-HUMS system also makes it possible to transition to maintenance “as-is,” and not according
to the regulations, which can significantly reduce the financial costs of the operating company and
increase the efficiency of the helicopter business.
Mi-171A1 helicopters were used by Atlas Taxi Aereo in harsh environmental conditions to support
Petrobras drilling in the rainforests of Brazil, and they showed their best side. In a year of intensive
operation, one helicopter, for example, flew more than 1,000 hours (an average of 120 hours per
month), moving about 600 tons of cargo, mainly drilling equipment, on an external mount.
The Mi-171A2 was developed based on this helicopter, the result of a thorough modernization of
the Mi-8/17 helicopters. More than 80 changes have been made to the design of the Mi-171A2.
The helicopter is equipped with VK-2500PS-03 engines (a civilian version of the engines installed
on the Mi-28 combat helicopters) with a digital control system. One of the most important
differences between the Mi-171A2 and the helicopters of the Mi-8/17 family is the new carrier
system. The helicopter has a more efficient X-shaped tail rotor and a new main rotor with integral
composite blades with an improved aerodynamic layout. In August 2017, the helicopter received a
Type A certificate from the Russian Federal Air Transport Agency, which indicates implementation
of the most stringent safety requirements for civilian helicopters.

Posted by Minda Pertahanan at Thursday, February 14, 2019 No comments:

Rosoboronexport, part of the Rostec State Corporation, has launched a global marketing campaign to promote the AK200 series legendary Kalashnikov assault rifles manufactured by the Kalashnikov Concern.
“Export permits for the newest Kalashnikov AK200 series assault rifles have been obtained. From now on, Rosoboronexport may offer its partners the AK200, AK203, AK204 and AK205 versions, which will make their international debut at IDEX 2019,” said Rosoboronexport Director General Alexander Mikheev. “In Abu Dhabi, Rosoboronexport will hold presentations of these rifles in the course of negotiations with foreign customers on the supply of small arms. We expect strong demand for them in the Middle East and around the world.”
The Kalashnikov AK200 series assault rifles are in line with all current trends in small arms development, while retaining the best qualities of the AK-47, the legendary brainchild of the great Russian gunsmith Mikhail Kalashnikov, whose 100th anniversary of the birth will be marked in 2019.
“Currently, AK200 series assault rifles are supplied to government customers in Russia and are also ready to be exported abroad to partners who impose more stringent requirements on small arms. The Kalashnikov AK200 series rifles are our strategic product in the export area. In the framework of IDEX 2019, we have scheduled a series of negotiations where, among other things, we will discuss the new AK series,” commented Vladimir Dmitriev, Director General of Kalashnikov Concern.
“At IDEX 2019, Russia will showcase cutting-edge weapons and military equipment for countries in the Middle East region, which is of particular interest to Russian industry. The AK200 series assault rifles will be a key novelty that visitors to IDEX 2019 will see. The newest Russian Kalashnikov rifles have a considerable export potential,” said Sergey Abramov, Industrial Director of the Armament Cluster at Rostec.
The AK200 series rifles have retained all the advantages of the traditional AK pattern: reliability, durability and ease of maintenance. The rifle is equipped with integral Picatinny rail and can be fitted with necessary detachable equipment for the effective use of the weapon in various conditions, including in reduced visibility.
The length-adjustable buttplate and a number of ergonomic solutions for optimizing controls enable the users to fully realize their shooting skills, regardless of their anthropometric indicators and the availability of a variety of personal clothing, gear and equipment. The AK200 series has successfully passed the testing program, meets all the requirements for modern small arms and is an effective small arms system.
Posted by Minda Pertahanan at Friday, February 08, 2019 No comments:

Russia to exhibit naval Pantsir abroad for the first time ever 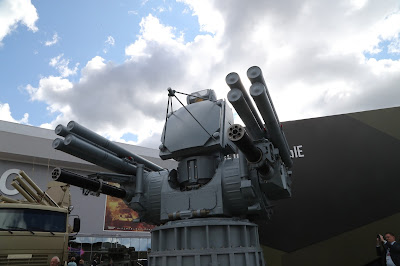 JSC Rosoboronexport (part of the Rostec State Corporation) and JSC NPO High Precision Systems will arrange the first demonstration within a foreign defence show of the Pantsir-ME shipborne air-defence missile and artillery system developed and produced by the Instrument Design Bureau JSC KBP named after Academician A.Shipunov.
The presentations of the Pantsir-ME air-defence missile and artillery system will be held at the IDEX 2019 exhibition on February 18-19, 2019. There will be a full-scale specimen to be demonstrated in the middle of the combined Russian exposition organized by Rosoboronexport, i.e. at the exhibit of the High Precision Systems (09-C20).
“The current trends in the development of the navies force the maritime powers to equip their ships with reliable assets to counteract air threats, i.e. cruise missiles, unmanned aerial systems, helicopters and planes. A sophisticated system of countering practically all the possible aerial kill assets has been developed in Russia, and it will be represented at one of the largest world defence exhibitions in Abu Dhabi. Pantsir-ME can be installed on most Russian warships and is very well fit for ships manufactured by other countries. I am confident that it has very good export prospects in the Arab countries, South-East Asia and Latin America,” said Rosoboronexport’s Director General Alexander Mikheev.
The Pantsir-ME air-defence missile and artillery system can be set up on ships with water displacement of more than 300 tons. The system provides a reliable protection of vessels from all the existing and prospective air assault weapons in the whole spectrum of their combat capabilities with an unconditional probability of kill, which is practically equivalent to one, including low-flying anti-ship missiles and unmanned aerial vehicles.
“Currently the Pantsir-ME air-defence missile and artillery system has no direct countertypes in the world market in the segment of shipborne air defence systems, and such will hardly pop up in the near future,” noted Sergey Abramov, the industrial director of the Armaments cluster in the Rostec State Corporation, “Demonstration of a full-scale specimen at the IDEX exhibition is a perfect opportunity to present this new state-of-the-art Russian weapon to our partners from the Middle East and Northern Africa – the strategic region of Rostec’s presence.”
The high effectiveness of intercepting anti-ship missiles is explained by high performance tactical and technical characteristics of the Pantsir-ME air-defence missile and artillery system. The system is capable of simultaneous firing at four targets attacking the ship while the kill zone for guided anti-aircraft missiles reaches 20 kilometers in distance and up to 15 kilometers in height. Besides, Pantsir-ME can first utilize its missile weapons, and then, in case of a miss, the target will be hit by the artillery fire with a 100 percent guarantee.
The system includes a high-intelligent multimode adaptive radio-optical control system. All the stages of operator work - from the target acquisition to the firing - are completely automated. A combined use of the radio and optical control system provides for the all-weather and round-the-clock operability of the system. All this permits a guaranteed elimination of targets at long distances and in close proximity.
Posted by Minda Pertahanan at Tuesday, February 05, 2019 No comments: