The formal transfer of the helicopter took place in the Kenyan capital of Nairobi in the presence of the Minister of the Interior of Kenya. Apart from the delivery, Russian Helicopters has also trained local specialists, as specified in the contract.  The delivered helicopter will be used for the needs of the National Police of the Republic of Kenya.

“We have successfully fulfilled the contract to supply our first helicopter to Kenya. Currently, the total fleet of Russian-made helicopters in the African countries exceeds 700 and it requires a gradual upgrade. Russian helicopters have shown good results in performing the widest range of tasks in Africa. We hope for further fruitful cooperation,” said Alexander Shcherbinin, Russian Helicopters Deputy CEO for marketing and business development.

African countries are traditionally among the biggest operators of Russian-made helicopters.  The Mi-8/17 type helicopters offered to African clients are intended primarily for the use in civil aviation, to transport cargo and passengers, including VIPs.  High-performance flight characteristics, reliability, ability to operate  in a wide range of climates, multitasking, ease of operation and maintenance make Russian helicopters one of the best options for the African market.

Posted by Minda Pertahanan at Friday, March 31, 2017 No comments:


March 22, 2017  The press conference of “Russian Knights” aerobatic team took place at the "LIMA'17" international exhibition (Malaysia, Langkawi). The participants were pilots of the "Russian Knights" team, Commander of the Air Force - Deputy Commander-in-Chief of the Aerospace Forces of Russia LtGen Andrey Yudin, President of the Irkut Corporation Oleg Demchenko.

In the opening of the press conference, LtGen Andrey Yudin stated that Su-30SM fighters, which were flown by the “Russian Knights” aerobatic team in Malaysia, featured essentially new piloting and combat capabilities.

The lead pilot of “Russian Knight” Col Andrey Alekseev stressed: “It is the great honour for us to represent Russian Air Force with the best-in-the-world Su-30SM fighters, here in Malaysia.

He also claimed that the new aircraft are completely comfortable for pilots. “All pilots of our aerobatic team have mastered Su-30SM, so we will start to demonstrate aerobatics of six-aircraft formation soon,” he added.

While speaking at the press conference, President of the Irkut Corporation Oleg Demchenko, named “Russian Knights” pilots as the national treasure of Russia.
Daily demonstration flights of Russian pilots evoke rave reviews of the exhibition visitors and the press.
Posted by Minda Pertahanan at Wednesday, March 22, 2017 No comments:

Premiere of the “Russian Knights” flight program on new supermanoeuverable

March 22, 2017. At the "LIMA'17" international exhibition (Malaysia, Langkawi), for the first time abroad the "Russian Knights" aerobatics group presented its flight program on the new Su-30SM supermanoeuverable aircraft manufactured by the Irkut Corporation.The performance of the Russian pilots evoked rave reviews of the exhibition visitors and the press.

A joint press conference took place on March 22. The participants were pilots of the "Russian Knights" group, commander of the Air Force - deputy commander-in-chief of the Aerospace Forces of Russia LtGen Andrey Yudin, president of the Irkut Corporation Oleg Demchenko and the first vice-president of UAC Alexander Tulyakov.

The "Russian Knights" pilots highly appreciated the Su-30SM aircraft, which they received at the end of 2016. Col Andrei Alekseev, the group leader, said: "Malaysia was one of the first countries where our group performed after it was created in 1991. And it is here that for the first time outside Russia we present our new flight program. Supermanoeuverable Su-30SM aircraft enabled to make aerobatics more complicated and spectacular".

LtGen Andrey Yudin noted that the Su-30SM aircraft have been delivered to the Russian Armed Forces since 2012. "Pilots like new aircraft and they are successfully operated in combat units", - said Andrei Yudin.

"Su-30SM aircraft have great development potential", Oleg Demchenko said.
First vice-president of UAC Alexander Tulyakov said that performance of the “Russian Knights" on Su-30SM aircraft perfectly demonstrates the capabilities of aircraft and promotes them to the world market.

The press conference was accompanied by the presentation about the "Russian Knights" aerobatics group and the Su-30SM aircraft.

Posted by Minda Pertahanan at Wednesday, March 22, 2017 No comments:

March 21, 2017- On the first day of the "LIMA'17" international exhibition (Malaysia) top-management of Irkut Corporation and UAC held a meeting with Russian and Malaysian pilots.
Pilots of the "Russian Knights" aerobatics group and the 11th squadron of the Royal Air Force of Malaysia perform on supermanoeuverable Su-30SM and Su-30MKM aircraft respectively.
The air aces of the two countries, whose performances constantly evoke admiration of the audience, highly praised the flight characteristics of their aircraft.
President of Irkut Corporation Oleg Demchenko marked the high skills of pilots and their ability to use the maximum extent of the fighter’s capabilities.
First vice-president of UAC Alexander Tulyakov said: “Positive evaluation of aircraft given by pilots is very important for us - the developers and manufacturers".
The meeting resulted with a joint photo shoot against the background of Su-30SM and Su-30MKM aircraft.
Posted by Minda Pertahanan at Tuesday, March 21, 2017 No comments: 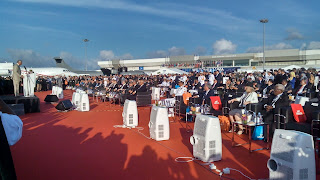 This year’s opening gimmick had the elite forces searching for a box containing a key
for the Prime Minister to activate the launch sequence. The key was located using
technologically-advanced, unmanned equipment that assisted the forces, including from the
Royal Malaysian Navy (RMN), and was handed over to the Chief of Navy, Admiral Tan Sri
Ahmad Kamarulzaman Haji Ahmad Badaruddin who then handed it to the Prime Minister.

Following the launch, a live action demonstration from the RMN Special Forces, the
Malaysian Maritime Enforcement Agency, the Royal Malaysian Police and the Marine
Department of Malaysia with the setting being a hostage rescue mission at sea.

Also present at the event was the Minister of Defence YB Dato’ Sri Hishammuddin
Tun Hussein, ministry representatives as well as exhibitors and delegates.
Posted by Minda Pertahanan at Tuesday, March 21, 2017 No comments: 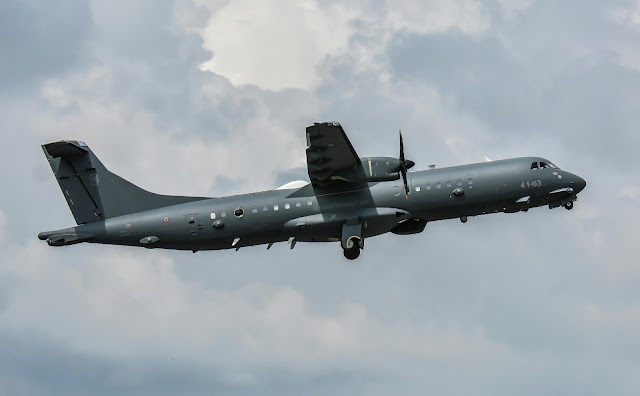 Langkawi, 21 March 2017 – For the first time since its introduction into service in December 2016,
the Italian Air Force’s ATR 72MP has flown overseas to attend the Langkawi International Maritime
And Aerospace Exhibition in Malaysia, from March 21 to 25.
During the show, the aircraft and its crew will be available to delegations and guests for hosted
visits and briefings.
Leonardo envisions significant export opportunities for the aircraft in the region
due the aircraft's low cost of operation, ease of maintenance and exceptional versatility in a
number of maritime roles.
The ATR 72MP, which was developed by Leonardo using the ATR 72-600 turboprop as a base,
can perform roles including maritime patrol, search and identification of surface vessels,
Command, Control and Communication, ISR, Intelligence, Surveillance and Reconnaissance, SAR
(Search and Rescue) missions, the prevention of narcotics trafficking, piracy, smuggling, territorial
water security and monitoring and intervention in the event of environmental catastrophes.
The ATR 72MP is equipped with Leonardo's ATOS mission system, which uses advanced data
fusion techniques to present a single tactical picture to the operator that integrates information from
all of the aircraft's on-board sensors. One key sensor on the ATR 72MP is Leonardo's Seaspray
AESA (Active Electronically Scanned Array) surveillance radar. Seaspray provides a powerful surveillance capability with a range of modes, all in a highly reliable package.
The aircraft also uses the latest communication systems, able to transmit or receive information in real time to/from command and control centres either on the ground, in the air or at-sea, to ensure coordinated and effective operations. The aircraft is also equipped with a self-protection system, fully integrated with the ATR 72MP’s mission system and avionics. The ATR 72MP can fly missions lasting 10 hours.
The ATR 72MP is a multirole Maritime Patrol, Electronic Surveillance and C4I (Command, Control,
Communications, Computers, and Intelligence) aircraft, available at a very affordable price.
Primary roles
The ATR 72MP’s primary roles are: maritime patrol to search and identify surface vessels,
command and control of other war-fighting assets in tactical scenarios, ELINT (ELectronic
INTelligence, search and rescue (SAR), prevention of piracy, smuggling and narcotic trafficking
and territorial water security. It can also carry SAR personnel. The is equipped with a complete C4I
systems suite incorporating multidatalink fully integrating Link 16 and Link11, Satcom Ku/Ka,
VORTEX, VMF and Radar Classifier, in addition to ESM ELINT (Electronic Surveillance Measures
– ELectronic INTelligence) capabilities.
The Leonardo ATOS mission system
The aircraft’s mission system, provided with four interchangeable Tactical Multifunction Consoles
with high-definition 24” monitors and touch-screen control panels, is the last version of Leonardo’s
Airborne Tactical Observation and Surveillance (ATOS) mission system.
The mission system suite represents the “core” of the aircraft and guarantees the accomplishment
of the most various missions, both maritime and overland, thanks to a high multi-role capability.
ATOS controls and monitors the sensors which collect, analyse, fuse, record and distribute all
available data by means tactical and wide band data links.
Functions supported by the Mission System include active and passive electronic surveillance,
optical reconnaissance in the visible and infrared bands, vessel identification, pollution detection,
net centric with C2 reporting responsibilities and mission planning.
The package of equipment includes Leonardo’s Seaspray 7300E active electronically scanned
array (AESA) surveillance radar with integrated IFF interrogator, a Star Safire HD electro-optical
turret, an Automatic Identification System (AIS), a C-SAR ASARS system and a Elettronica’s
Electronic Support Measures with a self-protection subsystem. The integrated communication suite
(ICS, V/UHF radios, HF radios) is provided by Leonardo including SATCOM (SICRAL)-capable
radio, SATCOM Wide KU/KA Band and Link 11/16, VORTEX and Variable Message Format (VMF) data links.
The ATOS mission system is fully integrated with a militarized ATR-600 Glass Cockpit.
Self-protection capabilities
The Self-Protection System suite, derived from the one that equips the C-27J Spartan battlefield
airlifter, includes chaff & flare dispensers (CFD), missile and laser warning systems (MWS and
LWS)) and a new RWR/ESM with ELINT and geolocalisation capabilities. The suite is integrated by
a new DASS Management Computer and can be operated from the cockpit via a dedicated DASS
display unit and DASS control panel. The ATR 72MP system fully meets the most stringent
requirements for hardware and software security.
The aircraft is interoperable through SATCOM System for data/video information and radio channel
for audio with a Ground Support Station based in the Main Operative Base to support the
capabilities of Mission Planning, Following and Debriefing
Posted by Minda Pertahanan at Tuesday, March 21, 2017 No comments:

Irkut Corporation (a UAC member) will take part in the "LIMA'17" exhibition which takes place on the Langkawi island, Malaysia, from March 21 to 25, 2017.
Fighters manufactured by Irkut Corporation will fly in the sky of the exhibition. The “Russian Knights” aerobatics team will present their new flight program on the Su-30SM aircraft for the first time abroad. Pilots of the Royal Air Force of Malaysia will perform demonstration flights on Su-30MKM fighters.
The aircraft models of the entire Irkut product line will be presented at the UAC stand: the Su-30SME fighter, the Yak-130 and Yak-152 training aircraft, and the new MC-21 commercial liner.

Posted by Minda Pertahanan at Monday, March 20, 2017 No comments: