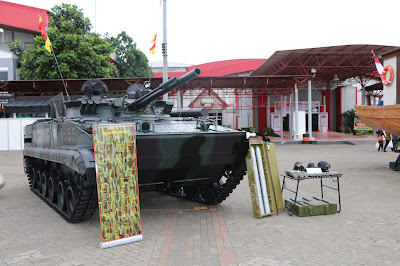 JSC Rosoboronexport (part of the Rostec State Corporation) and the Ministry of Defence of the Republic of Indonesia have signed a contract on the supplies of BMP-3F infantry fighting vehicles and amphibious armoured personnel carriers (APCs) BT-3F developed and produced by JSC Kurganmashzavod in the interests of the country’s Marine Corps.
“The contract on the supplies of BT-3Fs to Indonesia has become the first Russia’s export deal on these new vehicles in history. The design reflected the requests of the partners as well as their experience of using BMP-3Fs, which were delivered to them earlier. Indonesia is very scrupulous about the selection of materiel for its armed forces, and this contract is a serious marker of the highest quality of the Russian weapons and their superiority over competitors,” said Rosoboronexport’s Director General Alexander Mikheev.
Amphibious armoured personnel carrier BT-3F was developed on the basis of    BMP-3F and designed for the transportation of units of the marines, coastal guard and land forces, as well as for the fire support of landed parties in all types of combat operations.
The APC is capable of transporting 17 people, including crew members. The control compartment hosts the driver, a member of the landing party and commander’s assistant – at the left and right sides accordingly, both being capable of firing machine guns.
The APC is equipped with energy-absorbing folding chairs, providing a significant reduction in shock loads on the spine when exploded on a mine and when driving on rough terrain. The seats are equipped with five-point seat belts. In addition, the vehicles are equipped with an aggregate compressor air conditioning, which is vital for the conditions of a hot tropical climate.
The roof of the BT-3F accommodates a two-plane stabilized remote-controlled combat module with a 12.7 mm machine gun. For the purposes of monitoring the terrain and aiming, the combat module is equipped with a tele-thermal imaging sight with a laser rangefinder. The module is equipped with a built-in diagnostic system and ammunition counter with an indication of the “ran out of ammunition”.
A high level of unification in the case of the BT-3F armoured personnel carriers and BMP-3/BMP-3F reduces expenses and personnel training costs, simplifies the provision of spare parts and consumables, as well as their joint combat use.
“Indonesia is one of Rostec’s key partners in South-East Asia. The country is fulfilling both the projects in the area of military and technical cooperation and in the field of civilian products and transfer of technologies together with the enterprises of the state corporation. For instance, Rostec is exporting to Indonesia a wide spectrum of medical equipment. A subsidiary of the KAMAZ company has been established in the country to deal with the supplies of trucks to the local market. And we see a huge potential for the development of cooperation. Rostec is not just offering the entire range of armaments and civilian products of the state corporation , it is ready to build industrial partnerships of the highest profile,” noted Sergey Chemezov, Rostec’s head.
The military and technical cooperation between the USSR and the Republic of Indonesia has been carried out since 1958. Intensifica​tion of military-technical ties between Moscow and Djakarta took place in late 1990s – early 2000s. In general, since November 1992, the total volume of military products, supplied to Indonesia, has made up over 2.5 bln. US dollars.
Since then Indonesia has received BTR-80A armoured personnel carriers, BMP-3F infantry fighting vehicles, Kalashnikov assault rifles of the “100th” series, Su type planes and Mi type helicopters, as well as other types of weapons and military equipment.
Posted by Minda Pertahanan at Wednesday, April 24, 2019 No comments:

The Largest in the world helicopter completes preliminary flight tests

Moscow / April 3, 2019
Russian Helicopters (part of Rostec State Corporation) successfully completed preliminary flight tests of the Mi-26T2V helicopter. The machine is being prepared for a handover to the Russian Ministry of Defense to do joint official tests.

The upgraded heavy Mi-26T2V helicopter designed in the interests of the Ministry of Defense made its first flight in August 2018. The machine participated in the International Military and Technical Forum ARMY 2018.
Then it was transferred to Mil Moscow Helicopter Plant to do preliminary flight tests.

The customer requested that Mi-26T2V should ensure completion of tasks even in regions with complex physical and geographical and adverse climatic conditions, at any time of the day, at equipped and unequipped routes, or even without routes, and on featureless terrain, in conditions of fire and information counteraction of the enemy.

The new helicopter differs from the basic Mi-26 model due to a modern integrated NPK90-2V avionics suite, which significantly simplifies piloting of the helicopter.

The latest avionics system allows following the route in automatic mode, coming to a preset point, performing approach and final approach maneuvers, and returning to the main or alternate aerodrome.

The helicopter is also equipped with a digital flight center, and the crew cockpit has multi-function color LCD indicators that significantly reduce the workload of the flight crew.

Moreover, Mi-26T2V got a new airborne defense complex Vitebsk that not only detects a threat to the helicopter, but also repels attacks.

Mi-26T2 lighting equipment is now adapted to the use with night vision goggles, and the cockpit is equipped with new energy-absorbing seats for the crew.

There are also improvements to a navigation system and satellite communications of the helicopter.
Posted by Minda Pertahanan at Thursday, April 04, 2019 No comments: